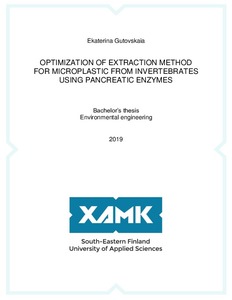 Gutovskaia, Ekaterina
All rights reserved. This publication is copyrighted. You may download, display and print it for Your own personal use. Commercial use is prohibited.
Näytä kaikki kuvailutiedot
Julkaisun pysyvä osoite on
http://urn.fi/URN:NBN:fi:amk-202003233775

Microplastic is recognized as an emerging contaminant in aquatic environments. To understand the microplastic fate in the system, efficient screening methods applicable to different ecosystem components are needed. Standard methods for the extraction of microplastics from biota are currently lacking, and most methods employing strong acids or bases can also degrade the polymers. Recent study revealed gentle and easy way of extracting microplastic from mussels with pancreatic enzymes. This thesis focuses on optimization of aforementioned enzymatic digestion method from the selection of the invertebrates.

Pancreatic enzymes were used to digest biota samples including small crustaceans, priapulid worms and jellyfish from Baltic Sea. Optimal conditions for digestion were chosen based on experiment data with amphipods Monoporeia affinis and mysids Mysis mixta used as test species. Several concentrations of pancreatic enzymes were tested as well as two methods of digestion in order to determine the highest digestion efficiency and the lowest load of undigested biological matter. Further, the method was applied to a range of pelagic and benthic invertebrates collected in the Baltic Sea. In addition, reference polymers particles were exposed to enzymes to investigate if protocol alters the polymers appearance in any way.

The optimal concentration of enzymes was chosen to be the lowest one out of tested – 0.1 mg/ml. With this method, digestion efficiency up to 87.60  0.04 % was achieved. Even though enzymatic products were influencing the weight of filter, the results were still acceptable for a successful identification of microplastic with both visual and FT-IR analysis. No changes were found in reference polymer after the exposure, which leads to the conclusion that pancreatic enzymes do not modify plastic particles during the digestion process.