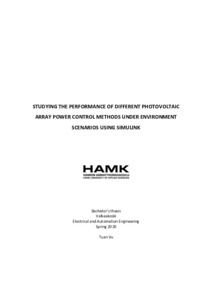 As a means of generating renewable power, photovoltaic array (PV array) has been increasingly harnessed. To regulate the output power of a PV array to the power grid, power controllers are needed. There are multiple electronic controlling methods which can manipulate the output power of PV array whilst not changing the PV array structure, light irradiance or temperature. The output power of the PV array can be affected by changing the environment, such as light and temperature, thus changing performance of the controllers. The goal of this thesis project was to test how well power control methods adapted to environmental changes as well as advantages and disadvantages when compared to each other.

Matlab and Simulink were chosen to conduct the tests on due to the high mathematical and electrical accuracy as well as the fact that data can be easily transferred between two platforms for visualizing results and programming. Control methodologies used in the project were fixed-voltage output control (known as PWM control), maximum power point tracking control (MPPT) and PI based maximum power point tracking control (MPPT-PI). Two environment scenarios common in real life where the PV array was tested were multiple seasons and partial shading. On the thesis project, several materials and models from different journals, Mathworks websites as well as Matlab library were used.