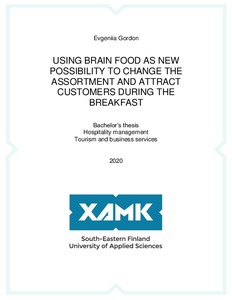 Gordon, Evgeniia
All rights reserved. This publication is copyrighted. You may download, display and print it for Your own personal use. Commercial use is prohibited.
Näytä kaikki kuvailutiedot
Julkaisun pysyvä osoite on
http://urn.fi/URN:NBN:fi:amk-202004296476

Today tourism and hotel businesses are developing at a high speed and because of this the competition between hotels is growing. At the same time, people care more and more about themselves and their health. Due to the large flow of information and the load on the brain, it is important to take care not only of the health of the body but also of the health of the brain. This thesis was aimed at studying the modern basics of nutrition for the brain and how the hotel can use this trend to their advantage.

To study this issue the theoretical foundations and quantitative research method were used. The theoretical foundations were articles and books describing a previous experience, the basics of management and the evidence-based foundations of the usefulness of certain products for the brain. Survey was used like a quantitative research method. It was sent out online via a link 23 people who already had experience in traveling and using the hotel service were interviewed.

The study showed that most respondents were interested in trying this service if it was presented at the hotel. Most people would prefer a hotel with this service than a hotel without it. At the same time, taste preferences of people were clarified, and it can be used for future researches.