Representation of obsessions and compulsions in art : Tick-tock on the clock // but the party don’t stop video installation as a case study 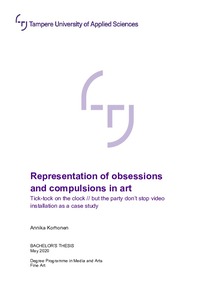 Korhonen, Annika
All rights reserved. This publication is copyrighted. You may download, display and print it for Your own personal use. Commercial use is prohibited.
Näytä kaikki kuvailutiedot
Julkaisun pysyvä osoite on
https://urn.fi/URN:NBN:fi:amk-202004306639

The purpose of this study was to gather information on artworks that explore themes of obsessions, compulsions and obsessive-compulsive disorder. Alongside this written part of the thesis, a two-channel video installation titled Tick-tock on the clock // but the party don’t stop was created. The study was conducted in order to form a theoretical basis for the video installation, and to place the installation in the context of contemporary art.

The data for this thesis were collected from a variety of sources, including articles, books and video interviews about relevant topics such as obsessive-compulsive disorder. Artworks from the 1990s to 2010s by artists Yayoi Kusama, Bruce Nauman and Léonie Hampton were analysed.

It was found that the artworks had several connecting elements, especially a focus on repetition of forms and actions, ritualistic behaviour and physicality. Furthermore, it was found that obsessive-compulsive disorder is a mental disorder not commonly explored in the field of contemporary art or talked about publicly. This would suggest that there is a need for more depictions of the disorder, in order to reduce misunderstandings and shame surrounding it. Art on the topic can lead to a better understanding of the disorder and help people suffering from it feel correctly represented.