Virtual Reality as a Medium in Contemporary Art : Work process of the Captured In-Betwixt as a case study 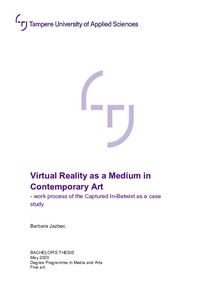 Jazbec, Barbara
All rights reserved. This publication is copyrighted. You may download, display and print it for Your own personal use. Commercial use is prohibited.
Näytä kaikki kuvailutiedot
Julkaisun pysyvä osoite on
http://urn.fi/URN:NBN:fi:amk-202004306679

I research the evolution of 360-degree videos, virtual reality (VR) and the new technology evolving in new media art in the contemporary art scene. I am interested in how immersive VR world is becoming comparable to the real one. I also present a report of the process of making my own artwork on the research topic. Based on this research, a video installation with VR glasses titled ‘Captured In-Betwixt’ was created. This installation is included in the Atomic Jungle online exhibition (www.atomicjungle2020.com). A physical exhibition will take place in the near, healthier future. My artistic part of thesis comes from the inspiration I got from the movie ‘Ready Player One’. The movie is based on a story of people living in the VirtualWorld. They are lonely in their real life but then they put on the VR headset with which they enter the world called the Oasis with their virtual body – avatar where there are many more individuals doing the same thing. They are in a way alone in the room with the headset but with the VR world they are together with other people – Alone together.

Even more than new technology itself I am interested in the topic of embodiment. I want to challenge myself with this research and see how easy it is to trick your brain that at that moment when you put the VR headset on that your brain really believes that you are there in that environment. I want to create my own virtuality with filming with my 360-degree camera in a real physical world and then transport it through VR headset in a virtual one. I want to research the relationship between 360-degree video and VR. Is something that is made and exist in a physical world still considered as virtual? If it exists in both virtual and real environments, can it still be considered virtual? What is the difference between what is real in virtual reality and what is artificial?

The research material includes also the analysis of the artworks by Milica Zec and Marina Abramović. ‘The BR41N.IO’ Brain-Computer Interface Designers Hackathon, VR and BCI center the lab RUK (Network of art research and culture centers), the art and science festival Speculum Artium and video festival Digital-BigScreen in Trbovlje in Slovenia have been great source of knowledge, impact and inspiration for my thesis.