Optimizing YouTube for the Development of Glass Performance Days 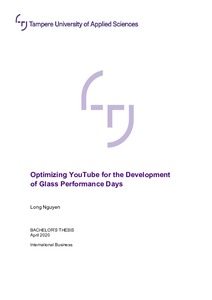 Nguyen, Long
All rights reserved. This publication is copyrighted. You may download, display and print it for Your own personal use. Commercial use is prohibited.
Näytä kaikki kuvailutiedot
Julkaisun pysyvä osoite on
http://urn.fi/URN:NBN:fi:amk-202005077753

The thesis was commissioned by Glaston Finland Oy, and the beneficiary was Glass Performance Days (GPD). Started in 1992, GPD had a long history and a great reputation within the glass industry. In 2019, the Organizing Committee decided to record the presentations during three days of the conference and find a way to share them on YouTube. Thus, the need for a content strategy to run the channel effectively even after the presentation series was inevitable. The purpose of the thesis was to figure out how to utilize the channel for the development of the event.

The thesis was carried out by action research methodology based on the concept of marketing 4.0 (Kotler, Kartajaya & Setiawan 2017), YouTube platform itself, and Community of Practice to understand the new customer path and how to use the channel to connect with the participants in a human-to-human level. After two months of launching the channel, a quantitative survey with both closed-ended and open-ended questions was sent to all participants of the event over the years to know the audience and their satisfaction with the channel. The secondary research was to learn about the modern marketing and the current statistics of the audience as well.

After the study, the author has found out how to improve the YouTube rating on the current and future videos, that the channel can have a great impact on the customer path as well as a community building-block. Additionally, an audience persona for GPD YouTube was formed, which help the channel’s future content to be more relevant to the people whom the brand serves.

In conclusion, with the audience persona, the author has recommended some actions for the organization to take which would be beneficial for the conference in the long run, which include ideas on content strategy, a steady move on multichannel marketing, a leads generation tool and a call to collaborate.