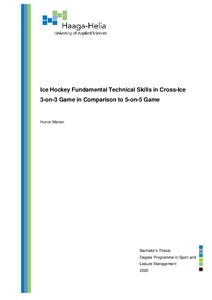 Hunor, Marton
All rights reserved. This publication is copyrighted. You may download, display and print it for Your own personal use. Commercial use is prohibited.
Näytä kaikki kuvailutiedot
Julkaisun pysyvä osoite on
http://urn.fi/URN:NBN:fi:amk-202005077727

Ice hockey is a unique sport played on ice. In order for one to become a hockey player, one must first develop and master the fundamental technical skills involved with playing hockey. Hockey as a sport is rapidly growing and spreading throughout the world, yet still full ice sized ice rinks and ice time is unavailable or limited in many countries and places.

The objective of this thesis is to make a comparison of the technical skills used in both 3on-3 cross-ice and 5-on-5 normal sized hockey games. The 3-on-3 and 5-on-5 format means 3 players play against 3 players and 5 players against 5 players. The focus was to analyze the collected data and present the differences between these two formats.

The theoretical basis contains review of both 3-on-3 and 5-on-5 game formats. This thesis also discusses what technical skills are required in ice hockey and the situations where those technical skill appear. Later, the thesis goes into data collection and comparison the skills used in both 3-on-3 cross-ice game and 5-on-5 normal sized games.

The data was collected and analyzed on video footage. In total 12 teams and 36 individuals were monitored for the research. The data was gathered from both games formats where teams played in 3-on-3 and in 5-on-5 full strength situations. After, the data was examined, results were derived, and the ratio number was created for the comparison.

The results of this study show when the size of the ice surface in ice hockey is reduced, more maneuvers and technical skills are required from individual players. Playing in small areas in 3-on-3 cross-ice hockey showed significant difference of technical skills use during game as compared to the 5-on-5 normal sized hockey game.