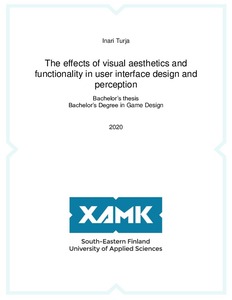 Turja, Inari
All rights reserved. This publication is copyrighted. You may download, display and print it for Your own personal use. Commercial use is prohibited.
Näytä kaikki kuvailutiedot
Julkaisun pysyvä osoite on
http://urn.fi/URN:NBN:fi:amk-202005108178

The objective of this Thesis was to study how the functionality and visual design of video game user interfaces can affect perception, and the different factors that may have further influence the viewer’s attention and user experience. As such, the Thesis goes over the different aspects of the design process of both user interfaces and user experience, and what elements should be considered in order to achieve a comprehensive unit.

The methods used to study this involved a screening where the participants were directed to observe three different versions of a prototype that all have unique design choices. In order to examine their perception, the participants used an eye tracker to record the movement of their eyes during the screening. The records were then further analyzed to study such factors as what the viewers observed first, how long did it take for them to notice the user interface, and if there were other aspects of the design that influenced their perception. The results also helped to determine which prototype version worked the best. After the screening, the participants were then asked several questions regarding the experience.

In order to acquire more extensive results, the prototype screening would have required more participants and a better testing environment. However, based on the preliminary results gained from this thesis, the outcome was that there were certain factors that clearly affected the viewer’s attention and experience with the user interface, thus supporting the hypothesis of this thesis.