Searching for the elements of safe, meaningful, and valuable human-robot interaction (HRI) with elderly people 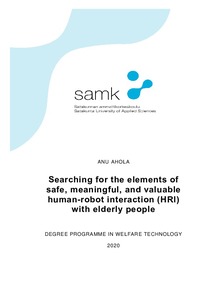 Ahola, Anu
All rights reserved. This publication is copyrighted. You may download, display and print it for Your own personal use. Commercial use is prohibited.
Näytä kaikki kuvailutiedot
Julkaisun pysyvä osoite on
http://urn.fi/URN:NBN:fi:amk-202005118215

The purpose of this study was to learn how the elderly people perceive the Human-Robot Interaction (HRI) and if their impressions contain elements regarding safe, valuable, and meaningful life.

The theoretical part of the study takes a look at the demographic transformation that justifies the need of robotics research in the field of socially assistive robotics with the elderly people. The empiric part of this research benefits the data produced by the Wellbeing Enhancing Technology research team of Satakunta University of Applied Sciences. In their experiment elderly people were interacting with the humanoid robot Pepper and afterward filled a structure questionnaire about their impressions. First experiment was done in August 2018 and it was repeated in the modified format in June 2019 for the part of original sample.

The qualitative study brings forward the need of supplementary services to the elderly care. It also provides evidence on how the elderly people seem welcoming new types of services to support their life and that they could consider robots bringing added value to their experience of safe, valuable, and meaningful life. It was expressed that robot could be a social companion, but not only if there is not another human available, and it was expressed that to the neutral robot could be even easier to talk. In order to release the full potential of socially assistive robotics with elderly people, it would require paying attention to the fluent functionality of the robot, including in the environment with normal background sounds. If the robot does not work as intended, this may lead to the difficulty to maintain the interest in interaction with it, despite of the positive attitude of an elderly person.