Impact of Agriculture on the Growth & Recovery of Nigeria Economy : A Case Study of Farming in Ayepe Community, Ogun State, Nigeria 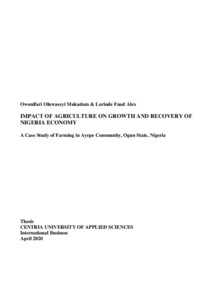 
Owonifari, Oluwaseyi, Mukadam
Larinde, Fuad, Alex
All rights reserved. This publication is copyrighted. You may download, display and print it for Your own personal use. Commercial use is prohibited.
Näytä kaikki kuvailutiedot
Julkaisun pysyvä osoite on
http://urn.fi/URN:NBN:fi:amk-2020051912194

The empirical part of this study was conducted using both quantitative and qualitative methods. Questionnaires were used to obtain information from workers on the farm, while interview was conducted with six different farm owners within Ayepe community in Ogun state Nigeria.

The result of the study showed that though agriculture is seriously thought of and adopted by so many people as a source of livelihood and means of generating income, it has a long way to go in improving the economy of the country. While most of the respondents believe that agriculture has what it takes to improve the country’s economy, they believe the government has a lot to do to see that come to reality. Proper funding and attention to the agricultural sector with the same focus given to the oil sector, agriculture will not only grow the economy, but will also put Nigeria where it is meant to be economically among the economically viable countries of the world.