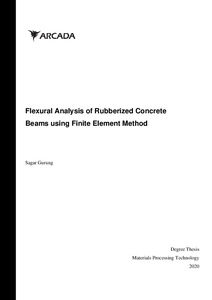 Gurung, Sagar
All rights reserved. This publication is copyrighted. You may download, display and print it for Your own personal use. Commercial use is prohibited.
Näytä kaikki kuvailutiedot
Julkaisun pysyvä osoite on
http://urn.fi/URN:NBN:fi:amk-2020051912261

The amount in consumption of rubber and its waste production has been rapidly growing which can be a serious threat to the natural environment. Waste tires are largest sources of global waste rubbers production, due to the rapid increase of human population. Disposal of rubber wastes and used tires is one of the biggest challenges for every country in the 21st century.
The objective of the thesis is to recycle rubber tire waste in producing rubberized concrete by partially replacing mineral aggregates (mixture of sand and gravel). In this study, the effects of percentage variation of rubber as mineral aggregates in concrete were studied, in terms of its behaviour under flexural load. This thesis deals mainly with the theoretical approach to analyse the flexural behaviour of rubberized concrete. This thesis also presents the previous related studies to determine the actual effect of rubbers in flexural properties of concrete. In addition, COMSOL Multiphysics software was used to do finite element analysis of rubberized concrete beams. The concrete beams containing different replacement percentages of rubbers (0%,5%,10% and 15%) were modelled and analysed in COMSOL Multiphysics. The study results showed that incorporating rubber as replaced rubber aggregates can cause significant effect on the flexural behaviour of concrete. It was found out that rubberized concrete has higher ductility, deformation and energy absorption capacity but has relatively lower flexural strength than the normal concrete.