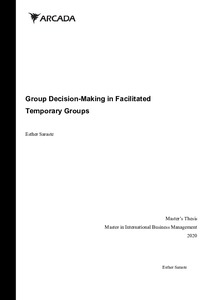 Saraste, Esther Faye
All rights reserved. This publication is copyrighted. You may download, display and print it for Your own personal use. Commercial use is prohibited.
Näytä kaikki kuvailutiedot
Julkaisun pysyvä osoite on
http://urn.fi/URN:NBN:fi:amk-2020052012590

“Teamwork at best is a way of synthesising individuals’ knowledge, skills and abilities in order to achieve exceptional creativity, innovation and productivity”, (Lisbona et al. 2020 p.2). Understanding how groups function be it temporary or an established group can have implications for leaders in business or indeed in any other setting in terms of how to ensure that group members identify and are committed to decisions that are made in groups. Research has shown that people are more likely to perform better if they are committed to any group-decisions made, which lead to better motivated and committed team. Facilitation is a leadership tool or method that aims to achieve consensus in decision-making. This thesis seeks to understand the phenomenon of group decision-making and establish the role of identification with the group for commitment to a group decision. Furthermore, the study seeks to establish whether and how differently conducted facilitation can influence the process of identification within the group. The thesis utilises quantitative research methods and is based on a survey and an experimental (quasi-experimental) study, between-subjects field experiment, using manipulation of established independent variables for three of the four experimental groups. Data were gathered via a self-completion questionnaire designed by the author in cooperation with the facilitator at Grape People. The questionnaire was designed to ascertain the degree of whether the subjects identified with other group members and if they felt committed to the decision they had arrived at as a group. The data were analysed using SPSS version 26. The thesis research does support the research question that temporary group members did identify with other group members (RQ1). The findings also discovered that the level of identification with other group members did correlate positively with the commitment to decisions made by the group. (RQ2). However, there were no statistically significant differences between the groups in terms of commitment to the group decision made by the facilitated group and how they identified with the other group members when the facilitation demonstration sessions were facilitated differently using different interventions/triggers (RQ3). However, there was a difference, albeit not a statistically significant one, between the control group and the groups where there was an intervention, and this could motivate further research. A post hoc analysis made by the author does suggest without confidence that age might be a factor in terms of identification of true decision-making, which again might motivate more research in this area.