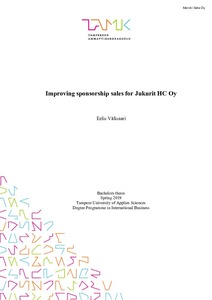 Välisaari, Eelis
All rights reserved. This publication is copyrighted. You may download, display and print it for Your own personal use. Commercial use is prohibited.
Näytä kaikki kuvailutiedot
Julkaisun pysyvä osoite on
https://urn.fi/URN:NBN:fi:amk-2020052513336

The objective of this thesis is to find out what sponsors are looking for in the sponsorship with Jukurit and how they are measuring the results of the sponsorship. The purpose of this study is to provide Jukurit with suggestions on how the sponsorship communication can be improved in order to increase the satisfaction of the current sponsors as well as enhance the sponsor acquisition process for new sponsors.

Jukurit is an ice hockey team that competes in Liiga, the top ice hockey level in Finland. By player budget and turnover, it is the smallest team in Liiga which has encouraged the organization to seek further growth in the sponsorship sales. In order to do so, the current sponsorship deals need to be studied in order to gain an insight of the sponsoring companies’ motives and objectives so that the sponsorship sales process could be made more efficient.

This thesis was carried out as a case study. The concepts relevant for the study were researched and explained in the theoretical part. For the empirical part of the study, qualitative research approach was used and current sponsors of Jukurit were interviewed. The interviews were analyzed, and suggestions were made based on the findings. The companies that were interviewed are not disclosed by names due to sponsorship deals being confidential in nature.