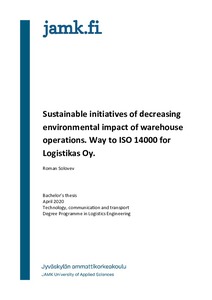 Solovev, Roman
All rights reserved. This publication is copyrighted. You may download, display and print it for Your own personal use. Commercial use is prohibited.
Näytä kaikki kuvailutiedot
Julkaisun pysyvä osoite on
http://urn.fi/URN:NBN:fi:amk-2020052413236

Constantly growing consumer needs are increasing the volume of production, services and transportation, and all this has environmental impacts. The ecological methods for the regu-lation of the environmental impacts that are the focus of the ISO 140001 standard were de-veloped by the International Standard Organization.
Examination of the ISO 14001 standard for establishing sustainable initiatives for diminishing warehouse operations’ environmental impact at Logistikas Oy in Jyväskylä was determined as a challenge. Four main objectives were defined for achieving an environmentally friendly position in the market. These included the introduction of the ISO 14001:2015 standard as the key element of the strategy of Logistikas Oy, development of the steps for receiving an ISO 14001 certification, exploration of the environmental initiatives implemented by the company, and examination of the spheres for improvement in the processes of the company.
The quantitative research approach was chosen as it was considered to provide scientific, objective, focused and acceptable results. The study aimed to describe the current state in the branch in Jyväskylä for a hypothesis of a decision plan based on the characteristics, com-parison and validation of the existing conditions. Reports on water, electricity, and heat con-sumption as well as waste volume were assembled. In addition, the daily operations were analyzed in terms of environmental impacts.
The significance of the implementation of ISO 14001 was reflected in the results. Proposals for developing sustainable initiatives for decreasing the environmental impact of the opera-tions of the branch in Jyväskylä were presented. Successful elements of these proposals can be transferred to Logistikas Oy so that it could become an environmentally friendly company and achieve the certification.