How to start a local indie journalism publication in Finland 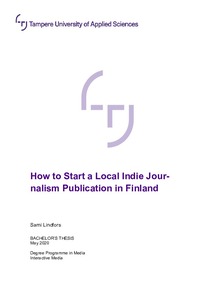 In this thesis, the author studies how to start an independent publication for local journalism and ways how the project can also provide income. Last decade hit hard on the media economy due to the disruption caused by the social media sites and other significant internet companies.

The change of how people consumed news content, especially on the internet, forced the media companies in Finland to reorganize their newsrooms, and it has led to even less journalists working for newspapers. The change also meant change in the local news sector, as many newspapers had to reduce their publishing times and, in some cases, even shut down entirely.

This change has left a need for active local reporting when larger news companies might lack consistent coverage in the area.

Since internet has provided a low-expense platform for publishing, it also means it can help individuals to keep reporting on local events.

In this thesis, the author writes from a perspective of trying to make a local indie journalism publication profitable, and studies other similar projects where independent journalists have developed their own local news publications.

Setting up an indie journalism publication is easy due to the reduced cost of media tools, but the author finds that creating sources of income via the web-site can be rather complex and hard without organization behind it.

This thesis finds that there are a variety of modern options, such as crowdfunding, to create revenue, but most projects have struggled mostly with organizing the work to maintain the sources of income.

Therefore, it can be said that creating revenue from indie journalism is possible, but it needs organizing the financial work apart from journalism, and courage to continue the work in a difficult field of entrepreneurship.