A comparison of advertisement in print and online - An eye tracking study of a magazine : Case study: Juoksija-lehti 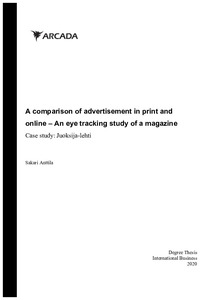 A comparison of advertisement in print and online An eye tracking study of a magazine.pdf (2.328Mt)
Lataukset:

Anttila, Sakari
All rights reserved. This publication is copyrighted. You may download, display and print it for Your own personal use. Commercial use is prohibited.
Näytä kaikki kuvailutiedot
Julkaisun pysyvä osoite on
https://urn.fi/URN:NBN:fi:amk-2020052613862

This thesis compares how readers view the advertisement in a Finnish running magazine’s (Juoksija-lehti) print version and digital version. The two magazine formats have identical layout. The study also has the additional objectives of finding out which magazine format the respondents preferred and if there are differences between how readers of the magazine and non-readers view the ads. The study was comissioned by Juoksija magazine’s personnel, who found that there was a need for the study, because of the changes in the field of advertising. It has become increasingly harder to attract advertisers to the print magazine as many of them find the digital possibilities and channels more appealing. The theoretical background was based on existing literature and relevant online sources. The study uses quantitative and qualitative methods as the data was collected with the use of eye tracking and interviews. The videos collected by eye tracking glasses were analyzed with a software.
The gaze plots showed that the print version had 24,8% more individual eye fixations on the advertisement than the digital one. The total time spent viewing the advertisement was 13% longer in the print magazine. The heat map results showed that most of the main focus was on the article headlines and text in both formats. 10 out of 12 respondents preferred the print version over the digital one. There were no major differences in the viewing of ads between the readers and non-readers. The main conclusions are that the ads in the print version gain more attention value and that the print is the preferred reading experience. The managerial implications based on this are that the print version should be taken good care of (it produces 70% of the income currently) and developed along with their new upcoming interactive digital magazine and web environment. This hybrid strategy can help the magazine in the future.