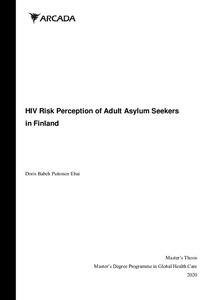 Puttonen Ebai, Doris Babeh
All rights reserved. This publication is copyrighted. You may download, display and print it for Your own personal use. Commercial use is prohibited.
Näytä kaikki kuvailutiedot
Julkaisun pysyvä osoite on
http://urn.fi/URN:NBN:fi:amk-2020052613737

Despite global efforts to fight against HIV/AIDS pandemic, the disease remains one of the leading causes of death in the world. In 2018, epidemiological statistics show approximately 37.9 million people were infected with HIV. This indicates the fight against HIV/AIDs is far from over, and there is still an urgent need to re-enforce HIV awareness, especially amongst vulnerable population groups like the asylum seekers. The components of the Health Belief Model (HBM) extensively explain HIV risk perceptions; thus, it is used as the theoretical framework. This study aims to understand the HIV risk perception and the needs for HIV prevention of adult asylum seekers living in Finland. Two research questions are raised to achieve this aim: what is the HIV risk perception of adult asylum seekers living in Finland, and what are their needs concerning HIV prevention? A mixed research design is used to investigate these research questions: a quantitative method for question 1 and qualitative methods for question 2. Convenience sampling was used for recruiting the participants. The quantitative data were collected using a 40-items self-administered paper-based questionnaire. Qualitative data collection was done through individual face-to-face interviews (8 items open-ended questions). Data analysis for the quantitative method was conducted by using SPSS Version 26, IBM. The qualitative data was analyzed and interpreted through content analysis. The results indicate a positive HIV risk perception and narrow dispersion from the median. HIV risk perception is correlated with knowledge on HIV and other independent variables like the participants level of education. Qualitative analysis revealed five categories of needs for HIV prevention: HIV education and information, preventive service needs, administrative interventions, personal needs and needs related to alleviate barriers of HIV prevention use. However, about half of the participants had not received HIV education in Finland, and most of them had not used any HIV preventive care services offered at the reception centre. It was concluded that the results from the quantitative research reflected the findings from the qualitative research. HIV risk perception is a vital aspect which needs to be understood by private and public institutions in charge of creating HIV interventions for asylum seekers. This study recommends more research to investigate factors influencing risk perception of asylum seekers and how it can be improved towards positive change in preventive actions and use of HIV intervention services.