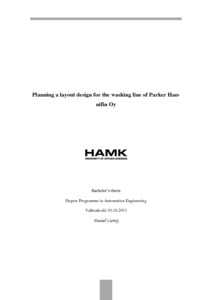 The aim of this thesis was to design a new layout and select the best conveyor system to enhance material flow to the complex industrial washing machines at the washing line. The purpose was also to prepare an Approval for Execution (AFE) plan to enable the commissioning organization to review the current and future benefits and payback time before the project is implemented.

A new layout was designed for the washing line in which a roller conveyor was selected to enhance the material flow to the industrial washing machines and from the washing line to the assembly line. Siemens s7 200 series programmable logic controller was proposed as the engineering software tool for the logic programs.

Project meetings were held with Parker Hannifin Oy Value Stream Manager, Process and Maintenance Manager, Maintenance Engineer and Ma-chine Operators prior to the commencement of the project.
The result of the thesis was that a new layout design for the washing line for Parker Hannifin Oy and a new integrated control system which control the conveyor system and the washing process of the complex industrial washing machines to maximize material flow within the washing and the assembly line.