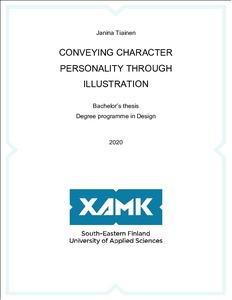 Tiainen, Janina
All rights reserved. This publication is copyrighted. You may download, display and print it for Your own personal use. Commercial use is prohibited.
Näytä kaikki kuvailutiedot
Julkaisun pysyvä osoite on
https://urn.fi/URN:NBN:fi:amk-2020052814813

The objective of this thesis was to study what is the most effective way to convey character’s personality through illustration. The thesis goes over different aspects of character design and illustration and how those details can be used to one’s benefit when illustrating characters.

The thesis was successful on its own narrow scale, but the project could be expanded to create more characters from the same world setting and creating a set of character sheets and illustrations. Alternatively the same character could be used, but he would be shown in different situations or at a different parts of his life.