Characteristics of Villains : Creating Story and Visual Design of Villains 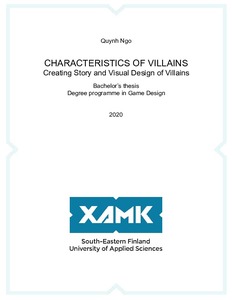 Ngo, Quynh
All rights reserved. This publication is copyrighted. You may download, display and print it for Your own personal use. Commercial use is prohibited.
Näytä kaikki kuvailutiedot
Julkaisun pysyvä osoite on
https://urn.fi/URN:NBN:fi:amk-2020052814803

The conflict between good and evil has been one of the greatest inspiration for countless pieces of art and literature throughout history. The objective of this thesis was to research the qualities made of credible, intriguing villainous characters. It had an in-depth look at both psychological and visual principles of this archetype. The depiction of villains in multiple cultures and history were also taken into account.

The thesis researched and analyzed characters from various pieces of literature, art, movies and video games. A lot of references were also taken from literature sources and from the internet. The method to create the psychology and visual for the villains were also discussed through the theory of conflict, personality traits, backstory, motivation, and physical appearance.

In the latter chapters, the knowledge gained from theoretical research was implemented to the actual character designs. Three sets of characters were created featuring different themes and were based on the relevant areas that had been studied. A questionnaire was conducted to prove the validity of the visual design reflecting the villain’s characteristics as well as to explore how audiences perceive the villain through their appearance. The overall result was relatively successful and there were rooms for essential improvement.

Due to time constraints and the lack of solution, a questionnaire for the writing part of the project could not be carried out, otherwise, more conclusive data could have been added into this thesis. Less time was spent on the project due to the unexpected extension of background research, which slightly affected the quality.