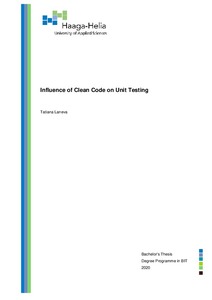 Laneva, Tatiana
All rights reserved. This publication is copyrighted. You may download, display and print it for Your own personal use. Commercial use is prohibited.
Näytä kaikki kuvailutiedot
Julkaisun pysyvä osoite on
https://urn.fi/URN:NBN:fi:amk-2020052814942

Agile methodology is widely used in today's Software Development. One of the stages of Agile Development is Maintainance. It highly influences the overall cost of Development. Maintainability of the Software can be improved in the Implementation stage by introducing Unit testing. Another way to improve maintainability is by applying principles and practices of Clean code. This parallelism in the aspect of improving maintainability yields further investigation of how clean code principles influence the testing process.

Case study research method is applied. Two cases are created. For the first case code writ-ten in an ad-hoc approach is used, for the second case, Clean code is used. Experienced software developers were asked to write unit tests for these two cases. Code coverages are measured, and the written tests are reviewed for both cases.