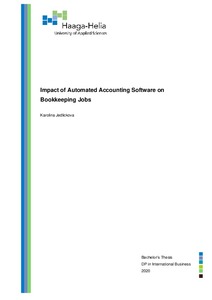 Jedlickova, Karolina
All rights reserved. This publication is copyrighted. You may download, display and print it for Your own personal use. Commercial use is prohibited.
Näytä kaikki kuvailutiedot
Julkaisun pysyvä osoite on
http://urn.fi/URN:NBN:fi:amk-2020052814972

Automation has been discussed as potential threat to many jobs, including those in accounting. The implementation of accounting and ERP software has had an impact on all employees in this field and especially routine tasks such as those in bookkeeping are rarely performed by humans. Automation, however, brings both, threats, and opportunities to the workers in the field.

The goal of the research was to map out the historical and current practices related to the automation of bookkeeping. The research focused on the development of automation in bookkeeping and what the usage of accounting software has meant for bookkeepers employed by large multinational companies.

In the theory part, the history of the automation in bookkeeping is described, from the early involvement of computers to Robotic Process Automation. The components of automated accounting software are introduced, and selected accounting and ERP software are presented. The chapter ends with assessing the overall advantages and disadvantages of the software currently available.

The actual practices in companies are examined in the empirical part by analysing survey sent out to bookkeepers in various companies. The focus of the questions was on advantages and disadvantages for the individuals’ jobs and on how they have learned to cope with the software. Comments on the topic from two interviewees were added to the survey responses analysis.

Both the survey analysis and answers from interviewees show that at the moment, automated software is not yet capable of doing the full spectrum of tasks and it brings positives and negatives to the daily jobs of bookkeepers. The common practice has been that bookkeepers learn to use the software on the job and the demands on them are high in the sense that companies often use multiple software for accounting. The job itself is highly likely to undergo a significant shift in the upcoming years by changing the scope of skills and knowledge required.