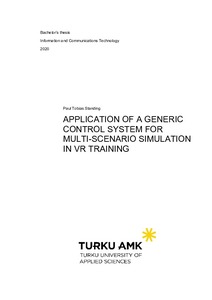 Due to the falling cost of hardware and the growing popularity of the technology, companies and institutions worldwide are becoming increasingly aware of the potential of using Virtual Reality (VR) as an integral part of their training processes. The benefits of VR training include giving employees a safe environment in which to make learning mistakes and giving employers the opportunity to remove the risk and cost associated with traditional training methods, using real equipment and people. With finite budgets and limited space for hardware, training providers still need to provide a comprehensive array of scenarios. The implementation of the controls as well as the hardware selection is an important part of the simulation setup, and this thesis investigates the best way to implement this, based on using as generic as possible a hardware setup.

A heuristic usability study was conducted with six people, including both potential users of VR training as well as VR development experts. The tests were conducted using a combination of different control mechanics and hardware to try to establish how intuitive and easy to learn the different control systems were.

The results obtained showed that users of the system found swapping between hardware controllers whilst wearing the VR Head-mounted display (HMD), to be extremely clumsy. Also, the respondents overall found that using control systems such as “look-and-click”, where the user looks at items with the HMD whilst pressing buttons on the steering wheel to be an intuitive way to interact with the virtual world. From the testers’ comments it became clear that guidance is a major plus point in these types of simulations, where step-by-step introduction to the controls, as well as an informative feedback system are highly appreciated by users of the system.