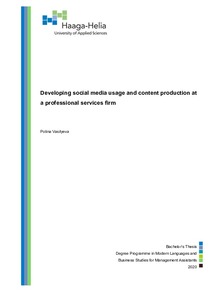 Vasilyeva, Polina
All rights reserved. This publication is copyrighted. You may download, display and print it for Your own personal use. Commercial use is prohibited.
Näytä kaikki kuvailutiedot
Julkaisun pysyvä osoite on
http://urn.fi/URN:NBN:fi:amk-2020053115639

Social media is a key tool for companies to interact with buyers, customers and media. Started as a good-to-have addition some years ago, usage and consumption of social media by businesses has grown substantially. Currently social media channels develop into full customer service platforms where buyers may not only get updates from businesses, but also purchase or subscribe to company services straight from the channel.

The aim of the thesis was to analyse social media content of a Finnish professional services firm, Dittmar & Indrenius, and to provide suggestions if any on how to improve social media usage and content production by the organisation. The theoretical framework of this thesis was developed based on social media state-of-art in B2B and B2C contexts as found in research articles and on the internet. Empirical data was collected from four social media channels of the professional service firm, Facebook, Twitter, Instagram and LinkedIn. The data was collected over a period of three months, September, October and November, in 2019 and it was based on postings on the channels. Overall, 68 postings were found and analysed, out of which 11 were on Facebook, 33 on Twitter, 12 on LinkedIn and 12 on Instagram.

It was found out that Dittmar & Indrenius relied on Twitter as the main distributing social media channel for publishing unique content and that the organisation used the remaining three channels mostly for sharing links from its website. In general, reader’s engagement to the postings was fairly low for all channels. Instagram had the highest engagement and Twitter had the lowest engagement. There was no effect of content format and type of messaging on reader’s engagement on different channels. Postings about people received more likes and had higher readers’ engagement, but it requires further investigation.

Based on the results, few improvements were suggested to the organisation, mainly related to publishing unique content and experimenting with different content formats and messaging.