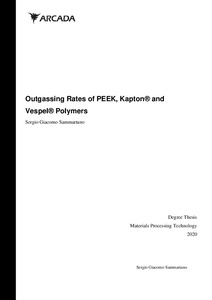 In this study commissioned by CERN, the outgassing behaviour of PEEK, Kapton® and Vespel® polymers has been investigated for potential use in the vacuum systems of particle accelerators. Polymeric materials are in general avoided in high vacuum (HV) and ultra-high vacuum (UHV) applications due to their high outgassing rates, which cannot be effectively reduced via bakeout procedures typically used with metals because of their usually low melting points and loss of mechanical performance above the glass transition temperature. The selected polymers have greater usability potential due to their superior thermal resistance and relatively low outgassing rates compared to most other polymers. Pump-down measurements were conducted on at least 5 samples of different thicknesses for each material, exposed to normal levels of moisture in the air (30-60% R.H.) prior to the tests. The data collected allowed to establish that diffusion of H2O molecules from the bulk to the surface of these materials represents their main source of outgassing when under vacuum; the concurrent release of other atmospheric species such as N2, O2, CO and Ar above normal levels, detected through spectrometric analysis of the residual gases, suggested that PEEK and Vespel® can also trap relevant amounts of air simply upon exposure. The decay of the outgassing rates of all three polymers, initially proportional to the inverse of the square root of time, was characterized by a time constant τ that depended on the diffusion coefficient of water inside the material and the square of its thickness; the diffusive process exhibited Fickian characteristics during pumping times up to 3τ, but diverged considerably from the expected behaviour when extending the pumping beyond this limit, indicating the occurrence of a secondary diffusive mechanism becoming manifest at low concentrations of the diffusing species in the bulk. An empirical model consisting of a 3-step equation was obtained through regression analysis of the data and the values of diffusion coefficients D and initial moisture contents c0 of each material were estimated by optimizing the parameters in the equations during the fitting procedure. The computed diffusion coefficients were 4.2∙10-9 cm2 s-1 for PEEK, 1.7∙10-9 cm2 s-1 for Kapton® and 1.8∙10-9 cm2 s-1 for Vespel, while the initial moisture content was estimated to be ca 0.3% in PEEK and ca. 1% in the other two materials. These values were found in good agreement with the information retrieved from the available sources.