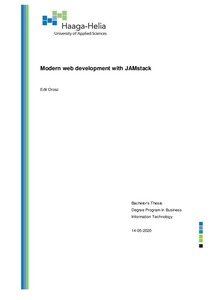 Orosz, Edit
All rights reserved. This publication is copyrighted. You may download, display and print it for Your own personal use. Commercial use is prohibited.
Näytä kaikki kuvailutiedot
Julkaisun pysyvä osoite on
http://urn.fi/URN:NBN:fi:amk-2020060115943

The reason for carrying out this research is the fact that it is beneficial for a software developer to be up to date about new technologies. JAMstack is a relatively new term in web development, that appeared around 2015 and there has not been widely researched in English which can be found in either Theseus or Haaga-Helia's internal thesis database. The aim of the research is to confirm the benefits of JAMstack written in the relevant literature and to bring up new aspects about what are the advantages of using it and are there any possible disadvantages of choosing this architecture. The research is also collecting data for whom is it beneficial to use JAMstack. The first part of the thesis is containing an introduction to the research topic, the methods, and the basic definitions. The second part is the theory already available in books and online sources. It is discussing the basic building blocks, features, advantages, and usage of the architecture.

The third part is the research with is collecting data from primary sources, both quantitative and qualitative. There has been a survey and several interviews carried out to gather the data from experts in the software development field.

The collected data is gathered and analyzed according to the main research questions. They confirm the already existing data and contain additional information that can be implemented by web developers and companies in future decision making either to choose JAMstack architecture or something else is more suitable for their projects.

The conclusion is that the four main benefits of JAMstack stated in the existing literature are valid and there are multiple more benefits experienced by the developers. The size of the project will distinguish if JAMstack is suitable for it or not. JAMstack can be beneficial for developers, companies, and clients as well.