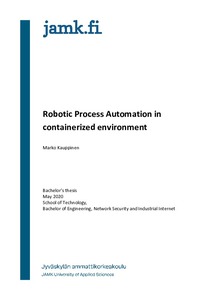 RPA has become one of the methods to automate computer-based processes. The use of RPA targets to implement software process automation into existing manual or semi-man- ual processes. Understanding the difference between automation methods is important to get the best possible results from automation. RPA itself does not necessarily solve all the necessary IT automation needs, and the final automation solution requires separate com- ponents to support the desired automation solutions more comprehensively. A compre- hensive IT system automation solution consists of many automation tools where RPA can be at the centre of control and monitor the implemented robot automation.
The purpose of this thesis was to deal mainly with RPA and partly with other alternative automation methods. Additionally, the objective was to cover application-based automa- tion methods and describe the implementation of RPA in a containerized environment us- ing open tools.
Visual Code was used as development tool to establish and develop Docker containers and its system component functionalities in one interface.
As a result, much was learned using and establishing Visual Code development environ- ment on Windows Linux subsystem. Its functionalities in containerized environment were observed.