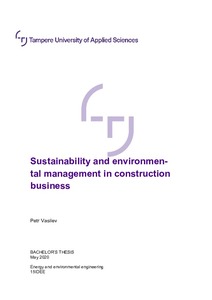 Vasilev, Petr
All rights reserved. This publication is copyrighted. You may download, display and print it for Your own personal use. Commercial use is prohibited.
Näytä kaikki kuvailutiedot
Julkaisun pysyvä osoite on
http://urn.fi/URN:NBN:fi:amk-2020060115939

The issue of the climate change has been steadily growing since the industrial revolution because of a severe increase in human activity. Today, to tackle the problem and reduce the amount of greenhouse gasses in the atmosphere a concept of sustainability is becoming more and more wide-spread. Companies choose to improve their environmental performance often with the help of the flexible ISO 14001 standard aimed to provide guidance for environmental management implementation.

This thesis is a case study of the first steps taken towards sustainability by a particular branch of the company AECOM that provides technical supervision of construction sites. The thesis is based on the previous work where an environmental management system was developed by the thesis author in accordance with the ISO 14001:2015 standard in order to improve company’s environmental impact and reap welfare and economic benefits at the same time. This thesis discusses the results of this experiment for AECOM and potential benefits and weaknesses of the standard.

With the scope of the company being taken into account, a number of documents have been studied during the creation of the environmental management system and other study methodologies were used, including internal auditing of company’s offices. An environmental management system was developed and presented to the company along with a set of recommendations for further actions and multiple supporting documents.

It is hard to say whether the developed document ends up being efficient in the future, since the environmental management system has not been implemented yet. Nevertheless, positive benefits achieved by other companies that decided to venture into sustainability and an abundance of opportunities for improvement of AECOM tend to suggest that an implementation of ISO 14001 based environmental management system will likely be an advantageous endeavor even despite the standard having certain flaws of its own.