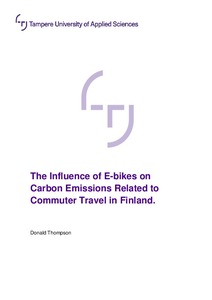 Thompson, Donald William
All rights reserved. This publication is copyrighted. You may download, display and print it for Your own personal use. Commercial use is prohibited.
Näytä kaikki kuvailutiedot
Julkaisun pysyvä osoite on
http://urn.fi/URN:NBN:fi:amk-2020060316486

This thesis aims to understand if electrically assisted bicycles, also called E-bikes, have at present, or in the near future, an impact on carbon emissions due to commuting in Finland. As this method of transport becomes increasingly popular in Finland, no data exists on the habits and attitudes of this commuter segment. Information through an online survey and from existing data on carbon emissions and commuter travel was gathered. Analysis of commuter habits and trends as well as the carbon emissions was performed from this.

The survey asked questions on E-bike users background, commuting journeys and environmental awareness. The survey was available for one week and had 213 individual responses. Results showed E-bikes had significantly changed the respondents’ commuter habits. Car journeys were mostly replaced, followed by cycling, walking and bus. Using existing carbon emission data, reduction of emissions through replaced car and bus journeys far exceed any increase from replaced cycling or walking. Responses to the survey also demonstrated further reductions in emissions would occur if trends continued and that limits to these reductions were based on cost, distance and infrastructure.

Based on the results, Finnish E-bike users followed trends elsewhere in non-cycling culture countries for usage, primarily car and bicycle replacement. Comments left by respondents indicate that decreased cost and increased battery life (or more charging points) would lower barriers for others to start E-bike commuting.