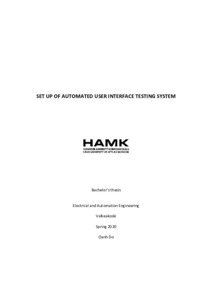 Do, Oanh
All rights reserved. This publication is copyrighted. You may download, display and print it for Your own personal use. Commercial use is prohibited.
Näytä kaikki kuvailutiedot
Julkaisun pysyvä osoite on
http://urn.fi/URN:NBN:fi:amk-2020060316611

Automation has evolved dramatically in the past decade, one aspect of this being software automation testing. The system used in this thesis is Nightwatch.js which is a Node.js-based framework solution for web applications and websites. With the demonstration conducted in this paper, the author aims to specify the vital role of automation testing framework in the software industry.

The commissioning party was Quux Oy, a software company located in Valkeakoski (Finland). The testing in the company are still done manually and there is an imperative need for the setup of an automated user interface testing system.

The thesis project included a theoretical review using online sources such as articles, forums, electronic sources, and the main website of the Nightwatch itself. The theory was focused on the definition of automation and on defining Nightwatch.js system along with all the required features to set up the system. The implementation part was where the whole set up process was being examined and recorded.

The outcome of the thesis project is a test suite where all the components required to be tested were covered. The targets of the thesis were achieved, with a justification for using this testing system in Quux Oy and its whole set up process.