Ageing well? A cross-country analysis of the way older people are visually represented on websites of organizations for older people 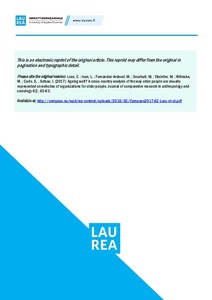 The ‘aging well’ discourse advances the idea of making older people responsible for their capability to stay healthy and active. In the context of an increased ageing population, which poses several challenges to countries’ government, this discourse has become dominant in Europe. We explore the way older people are visually represented on websites of organizations for older people in seven European countries (Finland, UK, the Netherlands, Spain, Italy, Poland and Romania), using an analytical approach based on visual content analysis, inspired by the dimensional model of national cultural differences from the Hofstede model (1991; 2001; 2011). We used two out of the five Hofstede dimensions: Individualism/Collectivism (IDV) and Masculinity/Femininity (MAS). The results demonstrated that in all seven countries older people are mostly visually represented as healthy/active, which reflects a dominant ‘ageing well’ discourse in Europe. The results also demonstrated that in most cases older people tend to be represented together with others, which is not consonant with the dominant ‘ageing well’ discourse in Europe. A last finding was that the visual representation of older peopleis in about half of the cases in line with these Hofstede dimensions. We discuss the implications of these findings claiming that the ‘ageing well’ discourse might lead to ‘visual ageism’. Organizations could keep this in mind while using pictures for their website or in other media and consider to use various kind of pictures, or to avoid using pictures of older people that stigmatize, marginalize or injure. They could look into the cultural situatedness and intersectional character of age relations and consider alternative strategies of both visibility and invisibility to talk with and about our ageing societies.