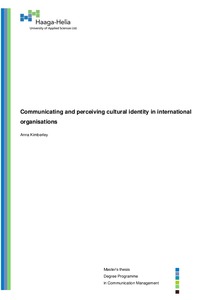 Kimberley, Anna
All rights reserved. This publication is copyrighted. You may download, display and print it for Your own personal use. Commercial use is prohibited.
Näytä kaikki kuvailutiedot
Julkaisun pysyvä osoite on
http://urn.fi/URN:NBN:fi:amk-2020061018142

The concept of work as closely related to people’s sense of identity and self-worth has been identified as a prevalent perspective in the 21st century. Work and positions of responsibility are associated with leading meaningful and fulfilling lives. Moreover, the focus on identity and its importance as a phenomenon has been identified as recent development in contemporary world. Identity became a matter of interest both at a personal, individual level and at organisational level. This concept created grounds for communication centred treatment of identity within organisations. Questions concerning identity in general and cultural identities of individual members and their identifications with organisational identity became salient.
The aim of this thesis is 1) to make a methodological contribution by combining critical and interpretive approaches by presenting theoretical reflections on the ways in which the ability to communicate individual cultural identity creates an intrinsic value for and within an organisation; 2) to make recommendations, based on the empirical study, on the ways internal communications can impact acknowledgment and recognition of diverse cultural identities within international organisations.
The research applies Interpretive Phenological Analysis (IPA) and borrows from the conceptual roots of narrative inquiry (NI). IPA draws its philosophical underpinnings from hermeneutics and phenomenology, whereas NI is located within the Deweyan ontology of experience. NI gives voices to individuals, thus allowing for their stories to be heard. IPA, with its phenomenological approach focuses on people’s perceptions and experiences of the world in which they live, and which gives them meaning.
The findings reveal that employees with diverse cultural background are perceived as marginalised others, and outsiders, of whom not much is known. The internal communications do not embark on any clear-cut practices in order to promote knowledge and acknowledgment of these individuals.
The role of communications professionals is crucial when it comes to recognising the importance of the connection between cultural identities of individual members and the way they identify themselves with the organisations. Through effective communications, they can promote the recognition and acknowledgment of cultural values of individual employees, thus contributing to development of truly international organisational cultures.