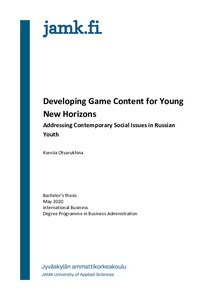 Otvarukhina, Kseniia
All rights reserved. This publication is copyrighted. You may download, display and print it for Your own personal use. Commercial use is prohibited.
Näytä kaikki kuvailutiedot
Julkaisun pysyvä osoite on
https://urn.fi/URN:NBN:fi:amk-2020061218617

In recent decades, the rise of global forced migration, including particularly the European mass migration crisis in 2015, turned the attention of the world to fostering cross-cultural competences in the leaders of the future. In 2016 JAMK University of Applied Sciences in Jyväskylä, Finland, partnered with George Simons International’s diversophy® game programme in developing a card-based game to support Finland’s increasingly multicultural society. The Young New Horizons project, started in 2017, continued diversophy® game development at JAMK. Young New Horizons is a gamified training tool to address social issues of interest to youth in Finland. The game facilitates dialogue between participants, and features content created to respond to the “Meaningful in Finland” action plan created by the Finnish Ministry of Education and Culture. Young New Horizons spun off of the original New Horizons game aimed at migrant and host acculturation, demonstrating the possibility to create collaborations resulting in new games that enhance communication and social skills. The first objective of the current study was to gain insights on topics of concern to Russian youth, as young Russians constitute a considerable part of the Finnish migrant community. As well, Russian culture content created for the original New Horizons game proved interesting to players. The second objective was to generate new cards for the Young New Horizons game with the help of high school students in Russia. A constructivist philosophy overarches the design of the study, the data was obtained using a qualitative inductive approach through game facilitation and card generation session with students, followed by an extensive focused group interview. The results provided valuable information on views and concerns of young Russians, and this provided inspiration to create new card drafts for the New Horizons game.