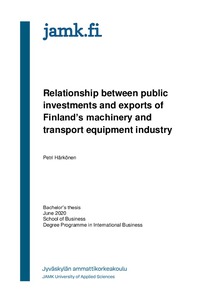 Härkönen, Petri
All rights reserved. This publication is copyrighted. You may download, display and print it for Your own personal use. Commercial use is prohibited.
Näytä kaikki kuvailutiedot
Julkaisun pysyvä osoite on
https://urn.fi/URN:NBN:fi:amk-2020061218601

The objective of the thesis was to research the relationship between public investments and export of Finland’s machinery and transport equipment industry. In year 2015 General radio of Finland [Yleisradio] published an article, in which it addressed the challenges Finland’s economy is standing on. The challenge was centered with exports, more precisely exports of machinery and transport equipment industry. At the time author was carrying through specialization studies and the chosen academic track related highly to the topic of the article, therefore the foundation for the motivation regarding this research was created.
Study was conducted as a quantitative research. Literature reviewed addressed definitions and measurements of two variables, public investment, and exports. Research materials consist of secondary data collected from the statistics of the Confederation of Finnish Industries [Elinkeinoelämän keskusliitto] and the Finnish Customs [Tulli]. Collected data shows Finland’s amount of public investments and exports in Euros through the years of 2010-2019. Microsoft Excel charts as well as Pearson’s correlation coefficient were utilized in data analysis to reveal the relationship between the amount of public investments and the amount of exports.
Although some inconsistent trends were identified regarding public investments and exports, Pearson’s correlation coefficient suggests a positive relationship between the two variables. This finding allows to make a suggestion to increase the public investments in order to stimulate the growth of exporting.