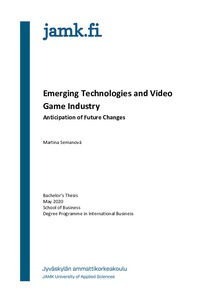 Semanová, Martina
All rights reserved. This publication is copyrighted. You may download, display and print it for Your own personal use. Commercial use is prohibited.
Näytä kaikki kuvailutiedot
Julkaisun pysyvä osoite on
https://urn.fi/URN:NBN:fi:amk-2020061518723

The video game industry is a growing field by the number of players as well as the market
value. Technologies are being developed at an exponential rate, creating different impacts
on game development, user experience and the involved organizations.

Primary data were collected from narrative stories/scenarios of eight respondents and
dissected using the multiple perspective method, which represented technical,
organizational, and personal perspectives. This analysis was supplemented by secondary
data in the form of desk study. The chosen methods, along with the context, established
the research as qualitative with an exploratory purpose.

The analysis revealed numerous similarities and a few divergencies between the views of
the players and experts, as well as between desk study and narrative research. From the
responses, likely scenarios of the future were drawn: technologies such as artificial
intelligence, virtual reality, wearable gaming, virtual studio production, ray tracing and 5G
technology, with the notable exception of cloud gaming, have a substantial potential to
influence game development and user experience in many ways. Different business
models were also identified to be continuously used in the market.

Findings included herein contribute to the overall research domain of video games, a
rather limited sphere at the present stage. Conclusions might influence and shape the
decision-making process of executives within affected organizations and have an
informative purpose for the consumers. Future research recommendations include in-depth studies on any of the aforementioned emerging technologies and their impacts on
the video game industry.