The Impact of the U.S. Presidential Elections on the Stock Market Risk - Return Dynamics 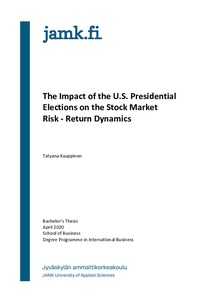 Kauppinen, Tatyana
All rights reserved. This publication is copyrighted. You may download, display and print it for Your own personal use. Commercial use is prohibited.
Näytä kaikki kuvailutiedot
Julkaisun pysyvä osoite on
http://urn.fi/URN:NBN:fi:amk-2020061618887

The political developments, such as presidential elections in a country, are strongly related
to economic, business, and social developments. The U.S. presidential elections are so
strategic that they impact current and future developments in political, economic, and
social developments not only within the USA but globally as well. Every time the
presidential elections take place in the U.S. the general instability phenomenon rises, which reflects on the climate of financial markets and it becomes volatile, uncertain, and
unpredictable in comparison to other times.
The main research problem of this thesis was to investigate if there exist any associations
between the U.S. presidential elections and the risk and return of the companies. The
secondary data were collected from 50 U.S. publicly listed companies for the four election
periods: 2004; 2008; 2012; 2016. Each period included pre, during and post-elections years.
All the data were collected from the S&P stock exchange official databases and the financial statements of the sample companies. The analysis was performed by using SPSS software. The analysis included descriptive, correlation, and multivariate ordinary least square (OLS) regression statistics. To support the research hypotheses, that the presidential elections affect the US stock market, the research methods were chosen in a logical and justified manner.
The empirical findings show that there is a strong relationship between the U.S.
presidential election and market fluctuation. The research results substantiate that the
Presidential elections make an impact on stock market risk - return dynamics. However, the unsystematic risk affected the sample companies’ risk adjusted return goes inversely,
whereas, the systematic risk was found to be positively associated with both annualized
return and risk adjusted annualized return performance are increasing. Therefore, the
overall narrative of the thesis is “that is higher the risk, higher the return”.