Video games as a queer platform 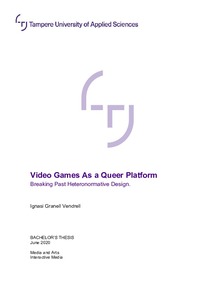 Recent years have seen a widespread debate on Gender, Sexual and Romantic Minority (GSRM) rights that has permeated nearly every aspect of Western society. This discourse has inevitably entered the video game scene and brought with it wider representation in the form of diverse characters, yet very little attention has been put into analysing the mechanics that shape one’s relationship with a game, and how heteronormativity affects them.

In order to do so it examines how video games reflect the environment they are built in, both in the larger abstract scale of Western society, and the smaller local scale of homogeneous design and development teams. Additionally, it explores alternative approaches to game design that departs with heteronor-mative traditional design and introduce a new possibility of play and explora-tion of one’s identity.

The conclusions were reached through this examination of the dynamics be-tween design and societal structures, as well as the observation of games that make use of disruptive design methods and implementations of non-conforming mechanics. And through the adoption of this transgressive design thinking, it compiles a design suggestion for a Queer game that deals with self-acceptance.