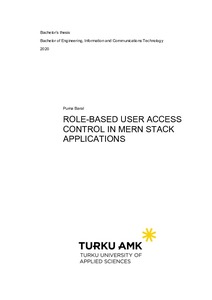 Baral, Purna
All rights reserved. This publication is copyrighted. You may download, display and print it for Your own personal use. Commercial use is prohibited.
Näytä kaikki kuvailutiedot
Julkaisun pysyvä osoite on
https://urn.fi/URN:NBN:fi:amk-2020061719014

Web technologies have been rapidly evolving. They have evolved along with the development and advancement of web browsers and scripting languages. Development of modern browsers, cascading style sheets and open source concepts are the main reasons behind the latest revolution in web tools and technologies. Web technologies have come a long way from static HTML pages to complex, powerful, full-stack web applications.

Inside the application, there can be some sensitive data or content that should not be accessible to every user. It should be accessible to only authorized users. To tackle this problem, the concept of Role-Based User Access Control was developed.

The main objective of this thesis was to research the various aspects of Role-Based User Access Control and implement them in a MERN Stack application.

This thesis provides a brief induction to a current approach to web development. There have been several addition to the web development stack recently. The stack that has been used during the technical implementation of this thesis is the MERN stack. This thesis describes the general idea of Role-Based User Access Control in the MERN stack application. The Application that has been developed with this thesis elaborates how the Role-Based User Access Control can be implemented on the MERN Stack applications from scratch with the tools and libraries such as PassportJS, ExpressJS, JSON Web Tokens, and BcryptJS.