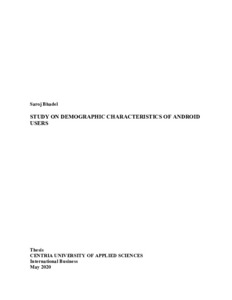 Bhadel, Saroj
All rights reserved. This publication is copyrighted. You may download, display and print it for Your own personal use. Commercial use is prohibited.
Näytä kaikki kuvailutiedot
Julkaisun pysyvä osoite on
http://urn.fi/URN:NBN:fi:amk-2019061717129

This is quantitative type of study which uses primary data through a survey. A questionnaire was developed and pretesting the questionnaire was done to maintain its validity and reliability. The respondents were selected by a random sampling method. A booth was established in New Road and people passing by were requested to participate in an interview. Those who agreed were included in the study. A total of 30 interviews were conducted. Then the tools were managed systematically. The data collected through interviews was entered in software called Microsoft Excel. The data was then further analyzed in a descriptive way.

The study suggests that demographic characteristics play a vital role in selecting and buying an android phone. Age plays a vital role in purchasing any type of goods in the market. The younger people under 30 are the main consumers to purchase the android phones. There were more students from high schools included in the study. More responses found advertising through social media when asked about the most effective form of marketing. It helps to figure out that the android phones are comparatively more sold due to social media advertisement. The survey helped to highlight the opinion of the respondents who stated that festival offers attract them more than that of other options. However, it needs to be considered that these conclusions were drawn by the survey done in New Road, Kathmandu with a very small sample of 30 respondents. Therefore, the future study can be done by including a higher number of respondents.