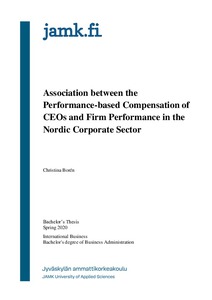 Borén, Christina
All rights reserved. This publication is copyrighted. You may download, display and print it for Your own personal use. Commercial use is prohibited.
Näytä kaikki kuvailutiedot
Julkaisun pysyvä osoite on
https://urn.fi/URN:NBN:fi:amk-2020061819094

The executive directors of companies serve as the agents of the shareholders and should serve their best interests in managing the company. However, according to the common agency problem Chief Executive Officers (CEO) and managers in general, are likely to put their own personal interests before those of the company and its owners. Therefore, it is crucial for companies to implement such compensation strategies that align the CEO interests with those of the shareholders by giving the managers proper incentives to maximize the company value. The composition of the company board of directors has been viewed as a key factor in creating such appropriate compensation packages. However, there is no clear consensus among researchers on whether a clear link exists between company performance and CEO compensation, or if the board of directors are truly able to control the CEOs’ power over their own pay.
Secondary quantitative data from 25 Nordic publicly traded manufacturing companies were gathered from NASDAQ OMX Nordic 40 database, the company financial statements, and annual reports for the period from 2011 to 2015 and analysed through descriptive statistics, correlation, and multivariate OLS regression analyses using IBM Statistics Software SPSSS. An overview of the data was obtained through the descriptive statistics, correlation analysis demonstrated the relationships between the variables, following with regression analysis showing the extent of the influence of independent variables on the dependent variables. The chosen methods and carefully selected research methodology enabled testing the hypotheses and answer the research questions of the study.
The empirical findings showed that performance-based pay had a positive impact on company financial performance for accounting-, market- as well as hybrid performance measures. The results also demonstrated that board structure ‘best practices’ board size and the ratio of independent directors on the board influenced the level of CEO performance pay in the sample companies.