System of waste separation : Status and challenges in China 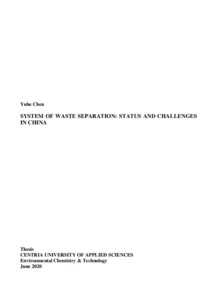 Chen, Yuhe
All rights reserved. This publication is copyrighted. You may download, display and print it for Your own personal use. Commercial use is prohibited.
Näytä kaikki kuvailutiedot
Julkaisun pysyvä osoite on
https://urn.fi/URN:NBN:fi:amk-2020061819125

With the rapid development of China's economic construction and the improvement of people's quality of life, China's MSW generation has reached 215 million tons, which is expected to reach 480 million tons by 2030. The increase in MSW generation put a significant strain pressure on MSW management systems in cities across China. But on September 2019, 46 key cities that need to compulsorily classify garbage have issued their own action plans, implementation rules or local regulations for waste separation, China's compulsory waste separation policy is on the right track.

This thesis begins with a survey of China's waste separation policy and various waste disposal methods, clarifying the meaning of waste separation and introducing China's waste separation system. The impact on two important waste disposal technologies is then investigated through the separation of waste. First, a comparison of incineration technology for separated waste and mixed waste shows that the average water content of separated waste is significantly reduced, carbon content is doubled and combustible components are tripled. This increases the calorific value of the incinera-tion and can reduce dioxin production and emissions of other pollutants. From the perspective of resource utilization, increasing the calorific value can also increase the efficiency of incineration power generation. This was followed by an analysis of the impact of waste separation on anaerobic digestion techniques, which led to the conclusion that waste separation could result in higher quality biogas yields from anaerobic digestion and reduced heavy metal pollution. This confirms the need for waste segregation: both from the environmental point of view and from the point of view of eco-nomic benefits and the social effects of waste segregation are considerable.