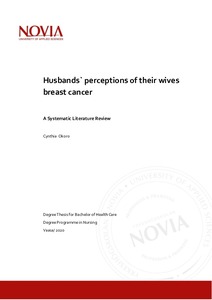 Cynthia Chisom, Okoro
All rights reserved. This publication is copyrighted. You may download, display and print it for Your own personal use. Commercial use is prohibited.
Näytä kaikki kuvailutiedot

Breast cancer is the most common type of cancer affecting women globally and globally it has been ranked second after lung cancer in terms of its mortality rate. The extent to which breast cancer affects women is severe, and similarly the husbands are more or less affected by the disease though indirectly. Breast cancer has been referred to as a disease of the couples and not an illness of the wife's breast. Therefore, the aim of this thesis is to explore the husband’s experiences of their wife’s breast cancer and how they were supported.

The theoretical framework applied in this study was the theory of illness trajectory by Wiener & Dodd. This study was based on a systematic literature review using an inductive approach. A total of six peer-reviewed articles involving qualitative studies and related to investigating the experiences of husbands of wives with breast cancer were included in this study. Three main themes were developed based on the articles reviewed including coping, marital relationship, and support.

The results shows that positivity and having hope for each day was the only means they could cope with illness. it also reported that few husbands felt supported by family members and friends, such as assisting in paying for the treatment bills and showing concern about their wife’s illness. The findings concluded that breast cancer affected their relationship with their wives, which impacted their sexual life.