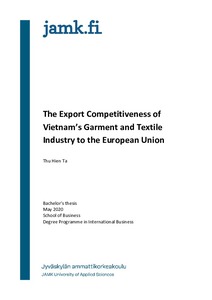 Ta, Thu Hien
All rights reserved. This publication is copyrighted. You may download, display and print it for Your own personal use. Commercial use is prohibited.
Näytä kaikki kuvailutiedot
Julkaisun pysyvä osoite on
http://urn.fi/URN:NBN:fi:amk-2020062719390

Vietnam, a country with an abundant amount of workforce for manufacturing sectors, as well as the complementary physical attributions, selected the Garment and Textile indus-try (G&T), more specifically, the exportations of garment and textile commodities, as one of the principle pillars for economic growth. The European Union, the region with an in-credible market size and the highest GDP per capita in the world, is one of the most im-portant trade partners for the G&T industry of Vietnam. This study aimed to examine the overall Garment and Textile industry of Vietnam and to evaluate the export competitive-ness of garment and textile goods from Vietnam to the EU. Porter’s Diamond model was chosen as the theoretical framework for this research. The performance of the industry was evaluated based on the four aspects with two external influences of the model.
An exploratory study was implemented with the complete usage of secondary data. The data were collected from credible sources such as governmental statistics, previous re-search, and reports from research institutions and organizations.
The research showed that Vietnam is competitive in garment and textile exportation to the EU. However, the country lacked knowledge resources, modern infrastructure and facili-ties, while the level of the workforce was rather low and Vietnam mostly produced goods with low added value. Moreover, there were growing rivalries against potential countries like Cambodia, Bangladesh, and Pakistan. The Government of Vietnam concentrated ef-forts to enhance the overall competitiveness of the industry.
This study provides relevant insight into the garment and textile industry of Vietnam and its export competitiveness, particularly to the EU. Later studies should stay focused on the data and produce more comparisons with other countries. The limitation of the study was the lack of professional opinions about the subject as the study was conducted entirely with secondary data, with minor discrepancies in reports from different organizations.