Norway’s response to the issue of climate change 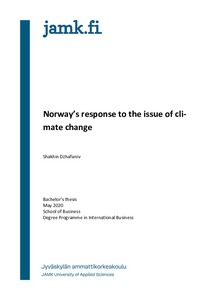 Dzhafarov, Shakhin
All rights reserved. This publication is copyrighted. You may download, display and print it for Your own personal use. Commercial use is prohibited.
Näytä kaikki kuvailutiedot
Julkaisun pysyvä osoite on
https://urn.fi/URN:NBN:fi:amk-2020062619374

Nowadays, climate change is one of the most urgent global issues. The future of civilization depends on how effectively it is addressed. Therefore, many scientists, researchers, activists and politicians around the world advocate for making more proactive decisions in order to achieve sustainability and sustainable development.
In the future, most countries will have to develop strategies for solving the climate change
issue. Therefore, it will be useful to have a role model for responding to the problem. Norway is considered to be one of the environmental leaders of the world. Thus, the objective of the study was to investigate the reasons and factors that contributed to Norway’s environmental progress.
The Quintuple Helix model was used as a theoretical framework in order to study the impact of four pillars, namely government, industry, universities and society, on the fifth pillar, the environment. The data was gathered and analyzed by using the qualitative approach. The collected data was secondary and was acquired from trustworthy online
sources.
The findings revealed that all helixes contributed to Norway’s progress in addressing the
climate change issue. Governmental organizations of the country managed the response in the form of legislation and regulations. Industries and universities with research centers
developed more sustainable practices and solutions, and the society put pressure on institutions and demanded proactive decisions related to solving the problem.
Practical implications of the study included the illustration of an effective response to the
climate change issue for countries that need, or will need, an example to follow.