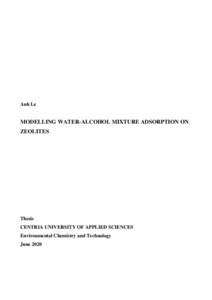 The aim of this thesis was to analyze and predict the adsorption of water-ethanol mixtures on four types of zeolitic materials: CHA, DDR, MFI, and FAU. The adsorption behavior was evaluated based on the extent of ethanol and water loading as function of total fugacity and partial fugacity. The isotherm illustrated by loading- partial fugacity is unary isotherm, then the saturation loading defined from these figures. The binary isotherm is shown by loading- total fugacity figures. Increasing total fugacity, the system adsorbs preferentially water molecules. However, FAU is exceptional because it is a Hydrophilic membrane.

IAST and RAST can be used to predict water-ethanol adsorption on different adsorbents. IAST stands for ideal adsorption solution theory. This method assumes that the adsorption behaves ideally. RAST means Real Adsorption Solution Theory, which is derived from IAST method. It differs from IAST method because of introducing of activity coefficient in calculation. The deviation of RAST from IAST is compared to define the effect of activity coefficient on adsorption behaviors. In this study, the IAST and RAST were applied as mixture adsorption models. The models had been implemented in the MATLAB environment.

Among these hydrophobic zeolites: CHA, MFI, DDR; selectivity result shows that CHA is the most efficient zeolite in separation of water and ethanol mixture at low fugacity, followed by MFI, then DDR. FAU zeolite is suitable for dehydration of ethanol.