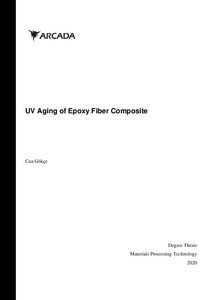 This study investigates additives capacity to reduce aging induced by UV light in epoxy. Hypothesis is that additives shield the material from UV light aging. To test this hypothesis 4 different batches of casts were made in moulds. Each batch included 5 pieces. First batch was pure epoxy, second batch was epoxy with cellulose, third batch was epoxy with glass fiber and fourth batch was epoxy with carbon fiber. One piece from each batch was kept as an unexposed sample. Therefore, there were 4 pieces in each batch exposed to UV light: one piece from each batch was exposed to 1 hour of UV light, one was exposed to 5 hours of UV light, one was exposed to 8 hours of UV light and one was exposed to 24 hours of UV light. After that specimens were tested in three-point bending test to collect stress-strain data and then as a last step FTIR scans were made of each sample. FTIR scans planned that scans of each sample`s both directly exposed and unexposed sides and also cross-sectional scans would be conducted.
UV light clearly changes the material`s chemistry after observations in FTIR spectrum. Changes observed after 1 hour of UV light exposure where C-H interactions appear around 2800 until 3200 〖cm〗^(-1) and in the region of C-O interactions which is residing around 1050 to 1250 〖cm〗^(-1). Absorbance change between 2800 until 3200 〖cm〗^(-1) reaches around 20% while it reaches around 40% at wavenumbers between 2800 until 3200 〖cm〗^(-1).
UV destroys the cellulose according to findings based on three-point bending tests. Therefore, this study suggests cellulose is not an additive to tackle this challenge. In glass fiber case there is an improvement in modulus as it doubled by compared to no additive casts, however, material becomes brittle. In case of carbon fiber added casts, even though it was expected that carbon fiber additives will increase the modulus significantly, there was a decrease in modulus by compared to pure epoxy, but however carbon fiber showed increase in strain limits. Findings suggest in glass fiber as well as carbon fiber points the need of further observations about how material would react if exposure exceeds 24 hours. FTIR scans points out that material was heated up instead of breaking the bonds which also correlates in getting higher stress levels (σ) in pure epoxy. Evidently, this study shows that exposure time was not long enough to break bonds to extend that brittleness which was developed.