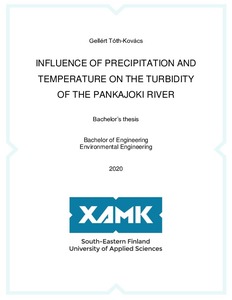 Tóth-Kovács, Gellért
All rights reserved. This publication is copyrighted. You may download, display and print it for Your own personal use. Commercial use is prohibited.
Näytä kaikki kuvailutiedot
Julkaisun pysyvä osoite on
http://urn.fi/URN:NBN:fi:amk-2020081219720

In Finland, more than half (about 60%) of the drinking water originates from groundwater sources. The Hanhikangas groundwater area is one of the key drinking water sources of Mikkeli, Finland. Since the Pankajoki river flows over the Hanhikangas groundwater area, any variation in the quality of the water in the river might pose risks to the quality of the groundwater in the aquifer. Finding links between the studied parameters might help to make assumptions on the water quality of both the river and the aquifer without further water sampling or continuous water quality monitoring. The key objectives of this thesis were to investigate and explain the possible influence of precipitation and temperature on the turbidity of the Pankajoki river, to find links between the quality of river water and that of groundwater as well as to investigate the reliability of the data collected by the used water quality probe. Quantitative research methods were used to achieve the objectives of the thesis. Daily means and daily total precipitation were the basis of the first and the second study objectives. The third study aim was examined by comparing the obtained reference samples to the respective real time automatic data. Spearman correlation and Mann-Whitney difference test were the basis of the statistical analyses after finding out that all the samples were non-parametric. The obtained values were later plotted, and the created figures were used for discussion. The research found that precipitation and temperature influenced the turbidity of the river differently month by month and season by season. In summer, the turbidity of the river did not significantly increase because rain possibly infiltrated into the soil, whereas in autumn and in winter, the increase in the turbidity of the river might be explained by surface runoff and soil erosion. The most significant link between river water and groundwater was seen between their conductivity values, possibly because the river water infiltrated directly into the groundwater area through the riverbed and the riverbank. Finally, the reliability of the real time instrumental data was proven by the reference samples in case of three of the four studied water quality variables, namely turbidity, conductivity, and dissolved oxygen.