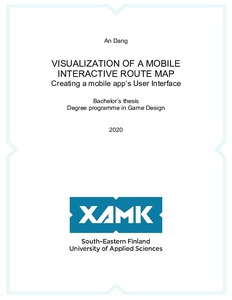 Dang, An
All rights reserved. This publication is copyrighted. You may download, display and print it for Your own personal use. Commercial use is prohibited.
Näytä kaikki kuvailutiedot
Julkaisun pysyvä osoite on
http://urn.fi/URN:NBN:fi:amk-2020090720149

An interactive navigation map is not only a tool for traveling but also a contribution to the whole experience the user has when using an application. Its visualization and functions have to follow not only the mapping standards but also the product’s general guidelines and style. The thesis attempts to analyze cognitive psychology related to wayfinding and spatial environment awareness. It leads to an understanding of how people follow navigation routes in general, with both analog and digital maps. Detailed studies also focus on information visualization in the mobile platform and how to optimize a map’s usability by improving its visual appearance.
Qualitative research methods for a User-Centered design has been conducted. Including ethnographic interview, user research, and interview, persona hypothesis, and scenario, it is followed by information architecture charts such as card sorting, sitemap, user flow, and wireframes. User Interface design takes precise practices with brand identity, which consists of UI frameworks, logo, and icon design with standard data based on the iOS system.
The thesis final product was an interactive prototype of PicBag, a mobile application that provides textile shopping bags sharing platform. The interactive map is used in there as an essential function for users to track down and find routes to bag stations. The prototype included a simulation of the process of using the map, as well as other features to represent the application’s concept.
Both the researching and implementation parts have achieved a certain kind of expected outcomes, although several aspects can be improved. The final product has succeeded in creating maps functions that work well with the application’s usability, as well as a visual style that fits the overall UI style.