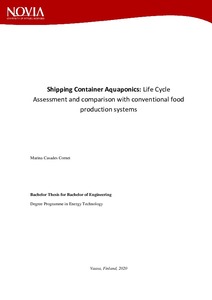 Casades Cornet, Marina
All rights reserved. This publication is copyrighted. You may download, display and print it for Your own personal use. Commercial use is prohibited.
Näytä kaikki kuvailutiedot
Julkaisun pysyvä osoite on
http://urn.fi/URN:NBN:fi:amk-2020090420109

The continued and forecasted growth in food supply-demand has put increasing pressure on the Earth’s ability to provide resources. New agriculture methods that assure to be more sustainable are appearing as a solution. One of them is aquaponics, a combination of hydroponics and aquaculture.

This thesis aims to undertake a full Life Cycle Analysis of an aquaponic system and evaluate its sustainability by comparing it with conventional food production systems. Firstly there was designed an aquaponic system to fit in a container. Afterwards, it was evaluated their environmental impacts using SimaPro. Finally, it was compared the sustainability significance between this aquaponics and traditional agriculture and aquaculture systems.

The findings indicate that electricity and equipment proved to be the more significant contributors to the impact categories. Although the extended use of shipping containers by aquaponic companies, it demonstrated to be the most pollutant component in most categories. Furthermore, LEDs contributed to more than 90% of all the energy impacts, which could be dispensable in aquaponics with the use of natural lighting.