Automation Of A Solar Panel Test-Rig 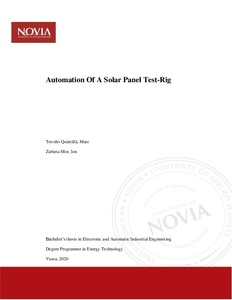 
Treviño Quintillà, Marc
Zubieta Mor, Ion
All rights reserved. This publication is copyrighted. You may download, display and print it for Your own personal use. Commercial use is prohibited.
Näytä kaikki kuvailutiedot
Julkaisun pysyvä osoite on
http://urn.fi/URN:NBN:fi:amk-2020091020330

The aim of this thesis is to construct a research tool for automatized tests on photovoltaic panels. The purpose is to create an instrument which enables the comparison of different types of solar panels in a controlled environment.

A program has been developed within LabVIEW and utilizing the ModBus Protocol is capable of controlling different parameters such as panel light intensity, applied load and energy meter data acquisition. A range of simulations has been performed for three different panels under the same conditions in order to be able to make some conclusions about which panel is better depending on each situation. It has been noticed that there is no significant difference in the output obtained by single-phase and thin-film 30W boards with the premise that single-phase is theoretically more efficient than thin-film.

Furthermore, the test-rig has also been used to study the behaviour of solar panels facing different shadow scenarios. Depending on the position of the shadow, the impact on the output power for the same solar panel can be from -1% to -99%. Finally, further research and different testing scenarios are suggested such as modifying the type of lights or analyzing the temperature of the panel and how this affects its efficiency.

Going further, this tool could be interesting and useful for a future study with different scenarios in order to understand better the behaviour of solar panels.